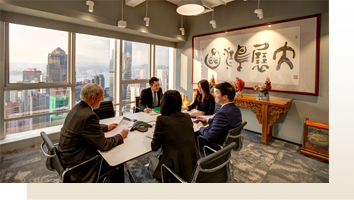 "Bringing Dreams for Wealth, with our Western Heritage, to Achieve Eastern Prosperity"

Atlantis was founded nearly a quarter century ago. As we celebrate this milestone, so hard to imagine when I started at Atlantis 16 years ago, I wanted to share my feelings about the three pillars that support our company.

The first of of these is our Western heritage. Atlantis’s earliest investors were British royalty. Our ties to Europe run deep, are in our DNA and are permanently a part of who we are. Also built into our chromosomes is the legacy of our English co-founders, who were literally among the inventors of modern wealth management.

The second pillar of Atlantis is our deeply held belief in a future of Eastern prosperity: a future that is already coming to pass. Our founders had the foresight to focus on Asia dating back to 1994, when most of the world was still skeptical. As the leader that inherited this vision, I am just as committed to China and the rest of Asia, the world’s most prosperous economic commonwealth and, soon, largest region for wealth creation. We are solely dedicated to delivering results to our investors, powered by this massive engine.

Our third pillar is what I call “The New Dreams for Wealth.” In my view, before us now is the greatest opportunity ever to inject new energy to value creation, but only if you are able to combine the best--the essence--of the East and the West. Change is the only constant. Reinvention is a must. Those with the right track record and innovation WILL WIN.

That’s what Atlantis sets out to do.